Lab-École’s architectural design competition catalogue is now available in English! Titled ‘Imagining the Schools of Tomorrow, Together’, the catalogue explains the different steps that were involved in holding the first architectural design competition for Quebec schools in 50 years and presents the finalists’ and winners’ designs. And of course, it features our own Pierre Elliott Trudeau Elementary School in downtown Gatineau!

This competition revealed the incredible creativity of Quebec architects in designing a new generation of schools: innovative schools with inviting, caring living environments, open to their outdoor space and to their community. The ideas and concepts that are presented in the catalogue are based on extensive research and discussions by Lab-École and various stakeholders from the school communities, conducted prior to the competition.

If you are into architecture, design, or if you are just a little curious to see what a redesigned school could look like, this a great read:

From Lab-École: The happiness and well-being of the children and school staff is what fuels the Lab-École team. The ideal school is one that makes the people who frequent it happy. There are so many schools, here and elsewhere, so many design approaches, so many good practices, that it would be a pity not to consider the ideas that have been implemented. Lab-École has taken great interest in these approaches, using many models as sources of inspiration. It is in this spirit that it is publishing the English version of its catalogue, to share and offer the best there is to all children, no matter where they live on this planet.

The competition in short

Lab-École’s mandate was to build six innovative new schools throughout Quebec. For five of these (the sixth was designed by Lab-École), it was quickly decided that an architectural design competition would be the best approach to keep the innovation momentum going and to invite the boldest designs. In total, 160 proposals were received from architecture firms across Quebec, demonstrating architects’ willingness to reinvent schools to benefit the children and school staff.

Why are we so excited about this?

Downtown Gatineau’s Pierre Elliott Trudeau Elementary School, or PETES for close friends, was selected as one of only 6 schools across the province for this project. It is a chance for a smaller and more close-knit community such as PETES’ to take part in reimagining their school. A team of PETES staff, teachers, parents, students and school board reps worked directly with the Lab-École team on setting the parameters and expectations for the competition.

PETES was in need of expension. Lab-École’s involvement allowed us to dream bigger!

The five winning designs at a glance 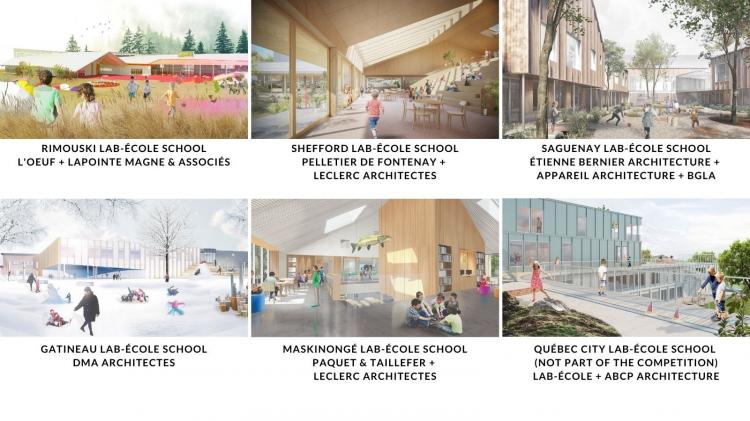 Share an idea, provide feedback, report a typo, or suggest another good news story with us by email at fraymond@wqsb.qc.ca.