About the Council of Commissioners

In addition to schools having their own Governing Boards, the Western Québec School Board is itself governed by a council of 16 commissioners. These 16 commissioners are either elected every four years by eligible voters whose names are on the territory’s English Electors List, or appointed under the Act as parent-commissioners, respecting school-level elections (governing boards). 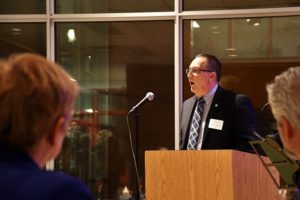 On 29 January 2019, the Council of Commissioners appointed Mr. Alain Guy as the new Chairperson of the Western Québec School Board. Mr. Guy becomes the fifth person to hold this position since the inception of linguistic school boards in 1998.

Alain Guy is far from being a new face in the Outaouais education landscape. First a parent-commissioner with Commission scolaire des Draveurs, he was then elected commissioner to our school board in 1998, where, for the next 20 years, he presided over internal committees and represented us at the Quebec English School Board Assocation (QESBA). In 2014, Alain became Vice-Chair of our board.

“I am truly humbled by the support of Council, and honoured to take on this new challenge as the new Chair of the Western Québec School Board.

The legacy James left with us is a great one: To provide the best possible English education for our learners. I am excited to continue in his footsteps and looking forward to the meaningful work ahead of us.

Our learners, our students are at the centre of everything we do. With that in mind, I believe in transparent, ethical decision-making, quality bilingual education, and in the ongoing consultation of all our local communities. I believe in the outmost importance of elected English school boards in the province, and promise to work alongside our English-language minority partners in Quebec for its promotion.“

The council of commissioners regularly meets once a month. Since the elected officials represent their community, they must take the time to become familiar with the issues that concern their voters and to inform parents, electors, the governing boards and the community as a whole of the decisions taken.

To write to our chairman or any of our commissioners directly, use this online form.

Procedure to Attend or Participate

Council of Commissioner’s meetings are open to the public. Those wishing to address the Council may do so during the Public Participation Period, which is normally between 7 and 7:15 PM.

All individuals or groups wishing to ask questions or state their concerns during the Public Participation Period are asked to submit a request to the Secretary General prior to the meeting.

School commissioners play a key role. Elected by the citizens, they determine the orientations of the school board, taking into consideration the interests of the students, parents and electors of their community.

Since the school board is an autonomous local government, the commissioners, who together make up the council of commissioners, exercise responsibilities comparable to those of municipal councillors.

Since 2014, the chairs of school boards are elected by universal suffrage, meaning that the electors choose the person who will chair their local school board.

The commissioner decides on the following matters:

Every person who is entitled to have his or her name entered on the list of electors and who, on polling day, has been domiciled on WQ territory for at least six months may be elected as a Commissioner. Notice will be given prior to the next elections. This notice will include all the information needed to file for nomination. For more information, refer to the Directeur Général des Élections du Québec.

Electors list – School democracy concerns all Western Quebecers. Parents of children attending a school, adults attending an adult education centre or a vocational training centre, and citizens who care about the vitality of their neighbourhood all have an interest in participating in the election process.

To be able to exercise your right to vote, you must first be registered on the permanent list of electors of the Directeur Général des Élections du Québec.

If you have one or more children enrolled at the WQSB, you will be registered for its elections by default, as long as you reside on its territory.

If you do not have children, or have children enrolled neither at the WQSB nor at the French-language school board serving your domicile, you will by default be entered on the list of electors of the French-language school board. However, you can always choose to enter the WQSB Electors list instead, by submitting a filled Opt-in Opt-out form to the General Directorate.

Each of the 30 WQ schools has its own Governing Board. It is made up of an equal number of staff members and parents. The Governing Board plays a crucial role in determining a school’s direction and works in conjunction with the school Principal.

The Governing Board is responsible for approving and overseeing a variety of issues including educational projects and the implementation of school budgets, regulation and student supervision policies. The Board is also involved in the choice of school textbooks and other instructional materials, school closures as well as the selection process for the appointment of the school Principal and confessional status.

The Parents’ Committee is an advisory committee to the School Board. Each school within the Board’s territory has a representative on the committee chosen from the parent members sitting on each Governing Board. A representative from the Special Education Advisory Committee (SEAC) also sits on the Committee.

Its primary role consists of representing parents’ interests within the School Board. The main responsibilities are:

Four Parent Commissioners, one for Elementary, one for Secondary, one for Kindergarten to 11 (K-11), and one from SEAC are elected from this committee to sit on the Council of Commissioners. One Parent Commissioner is also elected to sit on other committees of the School Board, such as Executive, Transportation, SEAC, Governance & Ethics, Audit, and Human Resources. Representation at the standing committee level is very important. It is at this level that many issues are raised, policies worked out and decisions taken for recommendation to the Council of Commissioners.

The Parents’ Committee is also to be consulted on the following matters:

Learn more about Parents’ Committees throughout the province

The Special Education Advisory Committee (SEAC) is an advisory committee to the Western Québec School Board. Each school within the Board’s territory may forward the names of interested parents of students with Individual Education Plans (IEPs) to the Parents’ Committee, which considers names submitted and designates members to SEAC.

SEAC’s primary role consists of representing the interests of children at risk or with disabilities, and their families, within the School Board. The main responsibilities include:

The committee may also advise the school board on the implementation of an individualized education plan for a handicapped student or a student with social maladjustments or learning disabilities.

The committee is normally composed of:

National Day for Truth and Reconciliation

Scheduled Virtual Meeting of the Council of Commissioners

Scheduled Virtual Meeting of the Council of Commissioners